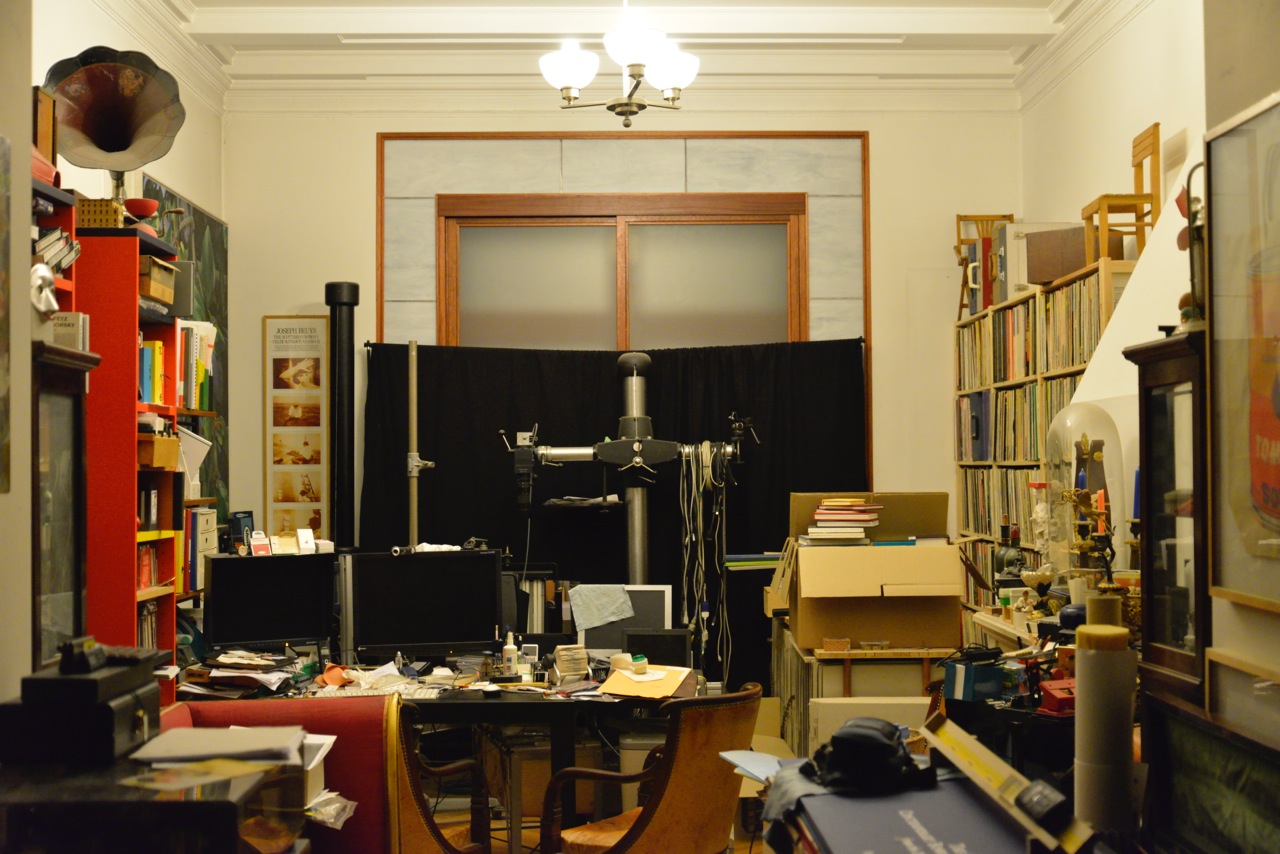 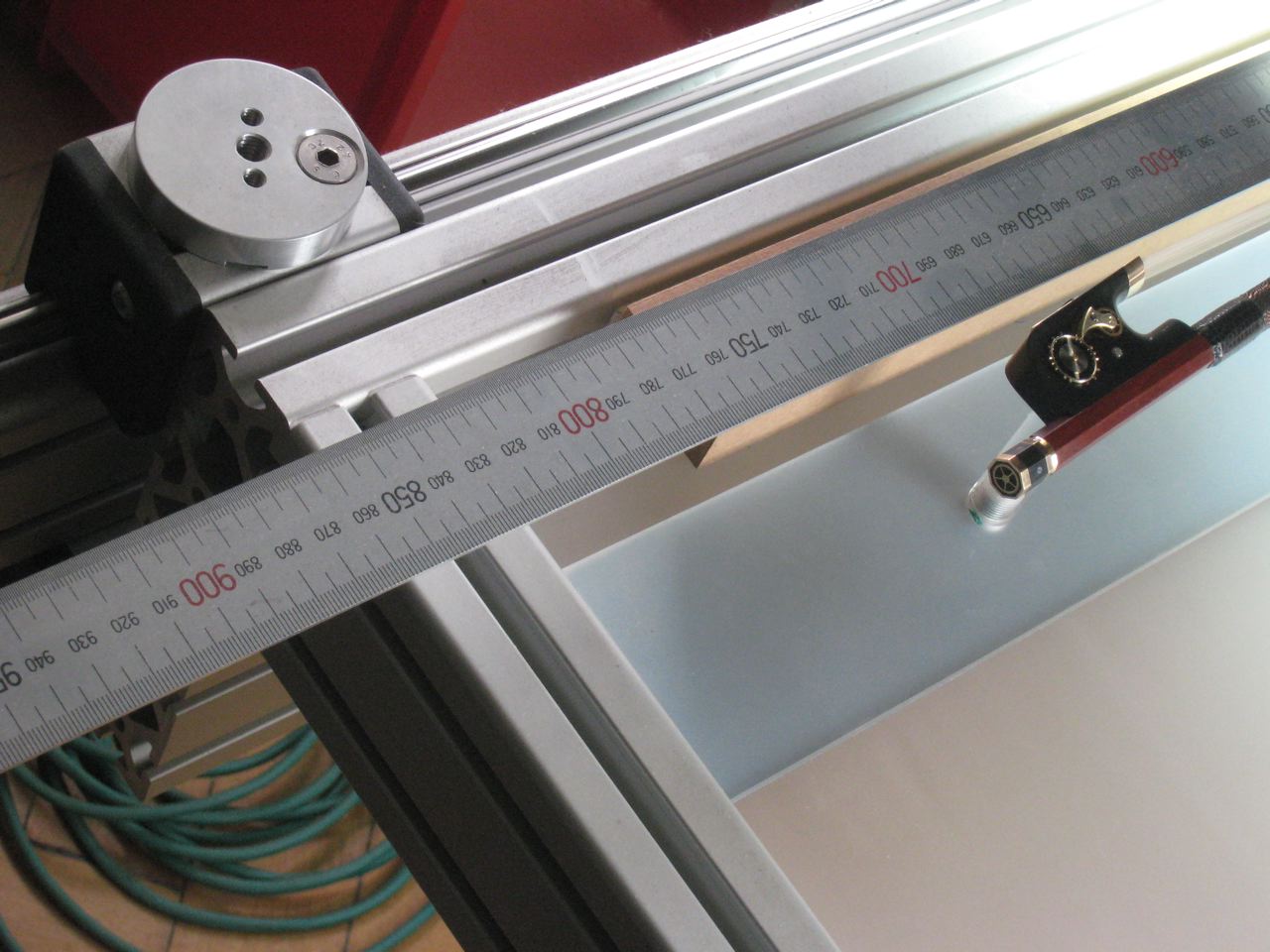 This book of 8 kilogram, the first volume of two, presents 282 bows from the violin family by the following 15 great contemporary bow makers: Morgan Andersen, Alexander Aumont, Sylvain Bigot, Christoph Collinet, Franck Daguin, Arthur Dubroca, Pierre-Yves Fuchs, Josef P. Gabriel, Eric Grandchamp, Klaus Grünke, Tibor Kovacs, Yannick Le Canu, Tino Joh. Lucke, Johannes Miething, Mitsuaki Sasano.
In Volume Two 20 other bowmakers are presented.
Briefly: The final reference book on contemporary bowmaking!
Every single bow is photographed with Swiss Slit-Scan technology by Andy Lim in full-size and full-length, showing for the first time in bow reproductions not only the head and frog, but also the complete camber. Photographed in the viewing angle where it is later to be looked at, the angle of 90°, unlike traditional photography, 19 bows per bowmaker is presented (less if there are double bass bows), showing early to recent works.

This ambitious book project, conceived in 2004, after years to overcome technical challenges and the imagination of many, is finally ready to the public in 2011(after 7 years!). In the past years one could observe an ever growing demand of the premier contemporary bows, more accepted and recognized as ever before as equivalent in beauty, craftmanship and playibility. In fact very often surpassing the bows of the well respected older masters, which we all love and admire. And from the cambers documented at least we know that they are contemporary, so most probably from the maker himself.

The 90 cm x 35 cm Book:
The Great Contemporary Bow Makers of the 21st Century.
Here some images of the printing and bookbinding in 2011.


here the preface of Vol. One:

An Address of Welcome to the Distinguished Reader

and how everything began …

After some years of Music Fair abstinence, I decided in 2004 to visit the Musicora Music Fair in Paris again, after an invitation by Gilles Nehr, when I discovered his spectacular „tête-bèche“ bow in the internet. I spontaneously called him in Lissabon, where he was living then. He was going to exhibit at the Musicora 2004 with his cousins, Jean-Pascal and Pierre Nehr at a „family-booth“. I only knew the name of Jean-Pascal Nehr, and was happy to meet the Nehr family.
There I also met for the first time some of the other contemporary bowmakers I have heard about, but actually never saw any work from. The first booth I visited, was the booth of Yannick Le Canu, Sylvain Bigot and Christophe Collinet. There were plenty of nice bows to see! Standing in front of some bows, displayed on a wall, I soon noticed someone standing next to me, also looking at the same bows. I looked to my side and saw a japanese gentleman, dressed in unformal black, sneakers and a multiple bow case in the hand. He did not look like someone from the violin trade, neither a typical asian visitor of music fairs like the Musicora, nor a musician. His way of looking at the exhibited bows though showed a very trained and professional eye. As polite as I am, I said „Hello, do you speak English?“ and got as an answer back a very brief „Yes“. As curious as I am, I was wondering what he did, so I asked him what he did. He said to my surprise that he was a bowmaker. I never have even heard from a japanese or other oriental bowmaker! Actually, not even to this day. On my request to see some of his work, he opened the bow case and I was shown a stunning quartet of bows with a style of chamfers I have never seen before. He told me by the way that he just was awarded the title „un des Meilleurs Ouvriers de France“ with that quartet of bows and a frog-copy of Jean-Dominique Adam.
I just met Mitsuaki Sasano.

1
Sometime in 2005 I received a phone call from someone who introduced himself as Andy Lim. He mentioned that some of my colleagues had told him to contact me about a project he had in mind and he proceeded to describe an early concept of this book. I found him amiable, refreshingly honest and stimulating to talk to but frankly did not know what to think about his book idea. I held off judgment until we had a chance to discuss things further and to see if he followed though with developing his ideas.

As we spoke over the following year I began to see that he was serious about making a book of full length photos of contemporary bows. I learned he was experienced in book publishing and knew what he was getting into. While not independently wealthy, he had spent a small fortune on the equipment needed to produce this book and was in the process of building a significant bow collection. He was also promoting contemporary bows in a number of other ways.

As a cellist and collector of bows he had become aware of how important the choice of wood, graduations and camber are to defining the quality of the final product. A book that has photos of either end of a bow can not relate these aspects to the viewer and thus was born Andy’s vision of a book of full length bow photos. He has proved to be as obsessed with overcoming the difficulties of producing such a book as he is with bows themselves and considers the form of a book as an artistic statement in itself separate from but complimentary to its content.

I found many of Andy’s ideas interesting, rather unique and in opposition to conventional approaches to business. The more time he had to explain his bow book idea to me the more he seemed unrealistically wedded to a concept of uncompromising quality and perfection. I had warmed to him as a person but I wondered if he might be a little crazy. The project he described, while wonderful, made no economic sense. What he wanted to do would be horribly expensive to produce and have an extremely limited audience. Would anyone in their right mind follow through with such a plan?

Not only was he taking on a huge endeavor himself with the book, he was asking a significant amount of time and effort from all of those who were to be its subjects. After much thought I told him I didn’t think I would participate. I felt it could be a costly distraction that had a rather high risk of failure.

After a period of not communicating, Andy began calling again to talk about bows and to tell me of progress on and changes to the book. We realized we were both going to be in New York at the same time in 2008 and arranged to meet. The following year I traveled to Germany where we spent more time together.

Ultimately, Andy’s degree of interest in contemporary bows and their makers and his passion for realizing his personal vision of a book on the subject became impossible to resist. Despite my initial reservations, I found myself drawn to be a part of it.

.3.
If lacking a certain type of reason is crazy, then my early concern that Andy might be a little crazy has proved to be true. But he is crazy in a wonderful way that makes the world a more interesting place. People who have a vision and pursue it purely for their conviction and not because it makes economic sense may not be the most rational people, but they hold the potential to produce things of unique artistic merit.

I believe it is this quality in Andy to pursue a passion at all cost that has resonated with many of today’s foremost contemporary bow makers. Taking the time to make a bow the very best you can, finding the most exceptional materials and being uncompromising in every detail of your workmanship and style is what makes bow making interesting to many of us, but it is far from being the most economically rational approach to the business. We recognize something of a kindred spirit in Andy and yet are still amazed at the lengths he has been willing to go to produce a document of our work unlike any other.

It has been an honor to be a part of this project and I sincerely hope it inspires not only as a record of bow making at this point in time, but as a symbol of pursuing one’s visions. This book and the man that made it embody that timeless aspect of the artistic ideal.

Many years ago I received a phone call at my shop in New York City  from a gentleman in Europe looking to acquire some cello bows.  I had never heard of this person and the caller let me know very quickly he was very sure of what he would like to acquire. He presented his thoughts in a very forward and rather direct manner.  This was my first and only contact with Andy Lim for many years.  Years later, I met Andy in person for the first time at Musicora in Paris. We had an extended discussion on many subjects and he reminded me of our first phone call years before. Oh, now I remembered him!  After meeting him in Paris, I understood my first phone call many years before in a much better light.
The contemporary bow book is a fascinating project for all those involved. It is not only beneficial to the makers and aficionado of bows but the concept and the technology of the book has great potential to be applied to many other subjects besides bows. Only Andy could come up with such a grandiose book project  and we thank him for his prodigious effor

When Andy Lim approached me a couple of years ago with his idea of a fullsize bow book on modern makers, I was quite sceptical, I have to admit. But after visiting Andy and viewing his highly advanced technical and photographic equipment together with his dedication for the project, I changed my mind and joined in. In the years to come we established a very good working relationship which turned into a friendship. The makers invited and involved in this exceptional book project represent an exquisite selection of today’s bow making from around the world. The overview of those craftsmen’s works of art in diferent stages of their career is a documentation to last. In this full size format, the viewers of this picture book will get a whole new look at the artistically tool called the bow. The opportunity to observe and compare the entire stick with its bending and graduation makes the impression of a bow complete, no more nor less.